The past few days I have had a headache that Would. Not. Go. Away. I think it's the weather(or just January?). It didn't stop me from getting my design work done, but it did kill my ambition to work on anything else this week. So not much happening in the mini world, and I think I'm just going to skip the, "Happy New Year", blog post (Happy New Year!)...

...Although I will take the time to say that because 2012 was supposedly going to be the year that the world ended(which I've known about since...6th grade), I approached things with more of a 'Carpe Diem' (seize the day!) attitude than normal. Went all in on the freelance designer/artist thing, walked away from the closest thing I ever had to a steady income because it was conflicting with my career goals, and ignored anyone that tried to talk me out of either of those decisions. So thank you 2012. I'm broke and uncertain of my future, but surprisingly not scared and way less delusional about that uncertain future.
2013, I've got a ton of work to do...Don't let me down.

So after two paragraphs of ranting, I now move on to what non-work thing I did manage to work on this week; 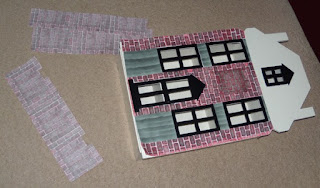 (Yeah, I know it looks like I just colored it red)

I filled in all of the extra spaces, (more stone/less grout), and made the templates for the other exterior walls. I drew bricks over the sculptural part for the time being, something is still going above the door, but the gray square was really bugging me (needs to be more Steampunk). I'll re-work that part later. 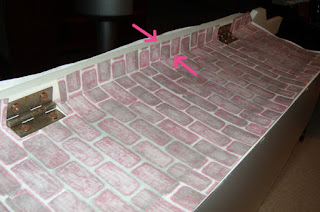 The house front/cabinet door is wider that the rest of the house/shelving, so a part of it that looks like interior wall (when open), is actually exterior. Which means that I needed to make a couple tiny wall templates for those places too (glad I caught that).

My plan is to glue and paint everything right on the templates and the stick them onto the house with double-sided tape. That way, should I screw up, or change my mind about this whole thing in a year or two, I'm not stuck prying it all off and then having to repaint the whole thing. And if  the tape stops holding in a year or two, and I still like it, then I'll permanently glue it all in place. It's either a good plan or I'm in the middle of another, "Learning Experience". Should be fun.
Also this week, I decided to start in on cutting out the egg carton stone pieces.
(Thus proving to my family-I am not a hoarder, I really am going to use these.) 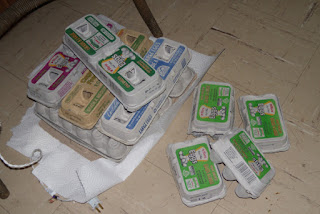 (I bleach these before I use them, Idk if you have too,
but it kills germs and it assured my family that their
egg carton donations weren't going to kill me...
...If you're not an adult, ask one for permission before using bleach) 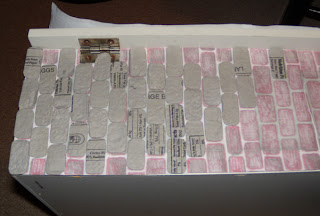 I only went through two of the smaller cartons so far (not sure if all the pieces are in that photo). The pieces are pretty big (considering everything else anyways), so only the carton tops worked. I'm still saving the bottoms though, I will probably find a use for them elsewhere.

Hoping to get more done next week, and catch up with my plans for the Etsy shop (that was supposed to be this week too, *sigh*).

Fortunately, the headache seems to be gone now (woohoo!).

Promote Your Page Too

Kyle Lefort
Hi there! I'm an artist and graphic designer currently residing in Western New York. Some of my projects are professional work, sometimes it's all in good fun, and honestly sometimes I can't tell the difference. This blog is a really informal continuation of my personal website (Hence it's name) where you will find updates, WIP posts, the occasional rant, more miniatures than even I know what to do with, reflections on life lessons learned, and whatever else could possibly come my way. I'd like to think I write about a little bit of everything. -We'll see how this goes. 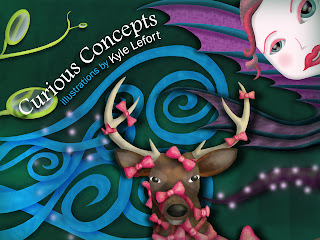